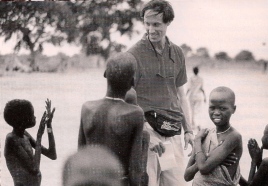 I started out in the early 1980s as a writer and reporter, covering  local businesses  and town hall meetings in Vancouver, British Columbia, before getting a graduate degree from Columbia School of Journalism  in New York,  where I specialized in magazine writing and science reporting. In 1989,  TIME Magazine hired me as a medical reporter and a few years later sent me on a one-year temporary assignment to   fill in as bureau chief in Nairobi, covering about 40 countries in subSaharan Africa. I had travelled in Africa while in college and after grad school, but this was something else. While I was there, the continent blew up into one of the biggest stories in the world, a post Cold War morality tale, starting with the deadly famine in  Somalia , subsequent ill fated US intervention  and the battle for Mogadishu, later dramatized in the film Black Hawk Down. My editors kept me on as bureau chief and I later reported and wrote about  the election of Nelson Mandela,  genocide in Rwanda, the civil wars in south Sudan and Liberia and the misdeeds of US evangelicals in central Africa. In 1997, they sent me to  Canada, of all places, where I started a family and served as editor of the Canadian edition of TIME, waging culture wars, before gratefully moving back overseas to  Central Europe. As bureau chief in Vienna, I reported from the ground in  Kosovo, Serbia, Turkey, Poland across the newly democratic countries of eastern Europe. Finally in the fading days of Time’s overseas bureau network, I was named the magazine’s bureau chief in Berlin, covering  about 25 countries, from Estonia to Montenegro, Sweden to Cyprus.   I wrote about war and politics, including a stint on the UN handling of the Iraq conflict and some business.  In 2009 , the Knight Program at Stanford University offered me a one year fellowship, which I gratefully took. While there, I designed a website to bring local journalists around the world closer to editors at home. From 2009 to 2015, I served as managing editor of video and multimedia  projects for the UN Refugee Agency in the Middle East, North Africa. I am currently writing a book.