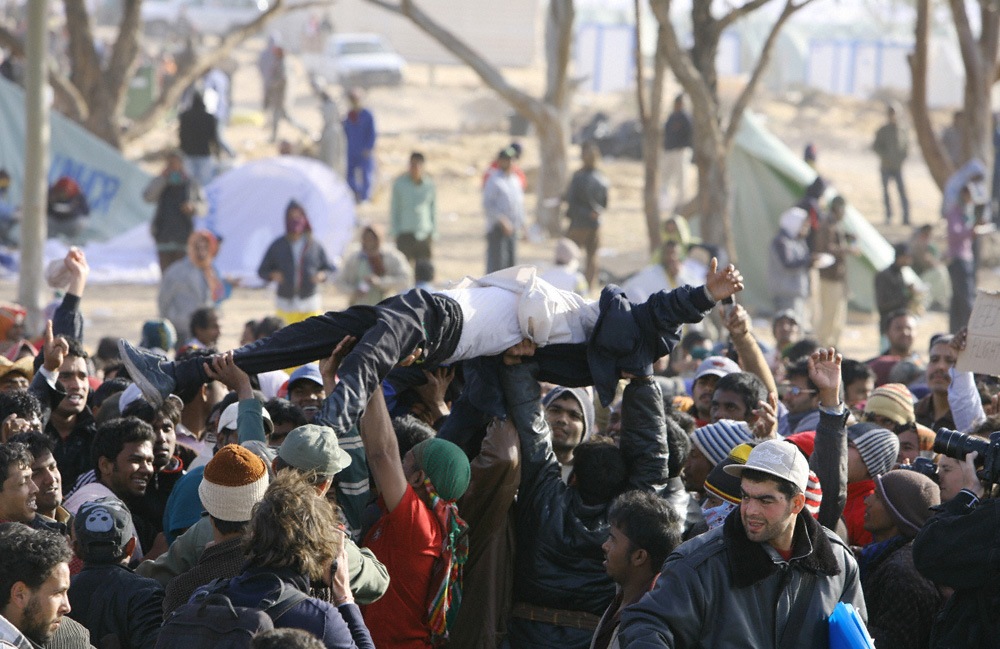 Diary from the field: Tunisia

UNHCR’s Andrew Purvis is on the Libyan border, gathering reports   about what is going on inside Libya and what is happening with the people who have already fled.

The wind blew most of the day, sand everywhere,  in your eyes, in your food.. I’ve discovered local almonds, very fresh. The humanitarian workers here are running on fumes, building camps, latrines, water,  recording personal histories, counseling, trying to

get things done. The camp population is still growing…topping 17,000, a small city.  Day starts early, with a long trip along the brackish marshland, through whitewashed villages, to the border,  and then all day   in the sun and wind,  thousands of   anxious, tired, hungry,  people desperate to go home  or, in some cases,  anywhere else..  Hearing the stories of those coming out of Libya, the depth and sheer brutality of the racial  discrimination there,  even more than the violence, makes you angry at the regime. One Eritrean could not even bring himself to speak of the humiliation he had experienced..  I’ve been noticing the   stamina  of people here, both the refugees and migrants, who have been through so much, and   the humanitarians  who are working so  single-mindedly to help   them.

I  met a girl  from Eritrea this morning  who had arrived in Libya after traveling smuggling routes   across Sudan , the Sahara  to Tripoli… She arrived here a few days ago.. She is  alone and wants to find her mother.. As she was escaping Tripoli through checkpoints in Libya,  Ghaddafi’s  soldiers kept demanding her mobile phone. They tried three times to take it from her and each time she refused, knowing the phone was the only thing to link her with her family.. Slight , she won out in the end..

She is helping   take care of  a four-year-old Somali boy, also motherless, whose own mother was killed in Mogadishu..Most of the people to have fled here to Tunisia are young men, but lately more families are coming, especially from Somalia, Eritrea and other places that keep swelling the  world’s population of refugees.. a 15 day old boy, round face swaddled in thick blankets, whose Eritrean father is in prison in Libya..   a young woman who is more than eight months pregnant. She says the wind blows too much at night, and the sand sifts inside her tent.. These babies will grow up in a better place than this..

On our way home not far from the border, our car was surrounded by a group of angry youths.. upset at something, not yet clear, rocking our car, I reached to lock the doors but opened the window instead, bad moment, but our Tunisian driver talked them down, edged forward, and drove on..

The camp on the Tunisia-Libya border is filled with people from all over the world, Ghana, Eritrea, Vietnam.  The Bangladeshis really stand out and not just because there are more of them..  they are   by far the  most orderly and patient  .. Just the other day we were talking about the exemplary tone they set.. .. But yesterday, their patience ran out. They did not complain when the companies that had brought them to Libya–from S. Korea, China, Italy–did nothing to help them when the violence erupted nearly three weeks ago (even as they evacuated their well-paid executives  from the Libyan border.) The Bangladeshi workers   waited nearly two weeks for their government to send enough planes to ferry them home.  They stood in  hours-long queues for food, showered in the open, waited days for their passports to be returned.. then something snapped.   Protestors barreled through the camp, hoisting signs with little child-like drawings of planes scrawled on them:  “We Need Air!”. At the end of the day, in a south-Asian touch, they threw one of their own half naked into the air, on his back, and marched him up the main road through the camp, as if he were a corpse in a funeral procession, symbolizing their own plight. Today, many   got what they wanted, a bus ride to the airport for the flight home. The lines in the camp have also been sorted out..   But now the Somalis are demonstrating..